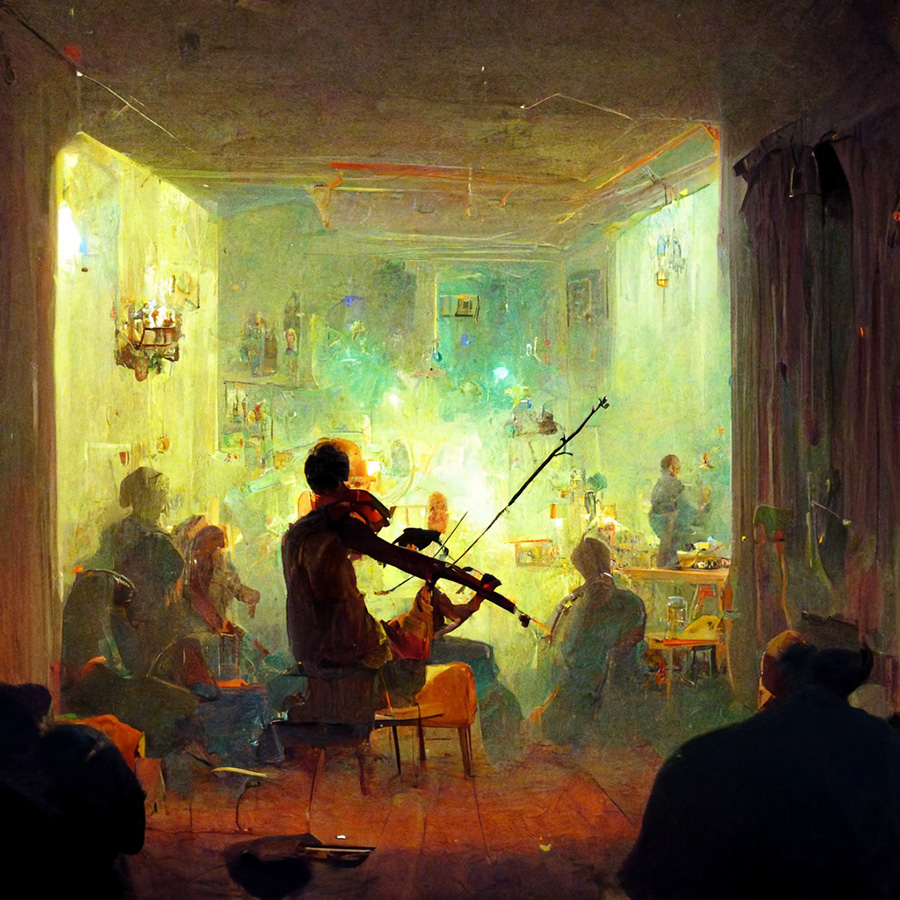 My Dead Love Came In by Bill West

Liam's coffin lay across two saw horses. It was littered with plates, half-empty glasses, and Liam's pipe. The coffin lid was a crooked fit leaving a crack into which spilt stout dripped. Liam's widow Margaret sat beside it, her pale hands crossed on her lap.

Outside the sea wind whistled over the shingle roof and tugged at the fishing nets drying on the stone walls.

The low door opened and night air stirred smoke from the fire. An old priest entered, removed his hat and scarf and sat down amongst the mourners.

Old Jimmy chinned his fiddle and played a lament. His brother, Michael pulled a tin whistle from his jacket pocket and played along, two voices dancing in the thick air.

When they finished Margaret asked the priest if he would sing "She moved through the Fair" for it had been Liam's favourite. Liam would sit on the seawall at sunset and whistle the tune, mournful as a gull. The priest smiled, stood amongst that rough company and sang, the fiddle and whistle accompanying him.

"Last night she came to me, my dead love came in So softly she came that her feet made no din/As she laid her hand on me and this she did say It will not be long, love, 'til our wedding day"

The priest put out a hand and leaned on Liam's coffin. The coffin lurched and crashed to the ground. Plates, glasses and the coffin lid slithered to the floor as one of the saw horses gave way. The mourners jumped up and crowded round.

Maybe Liam had awoken, drawn back from heaven to be with his beloved. But he was dead sure enough, his body wrapped in white muslin, his skin yellow as the scale on a cock's claw.

"Is it chemicals make him that colour?" someone asked.

"To be sure we're all Chinese in the eyes of the Lord," said a drunken voice.

"May you be in heaven a half hour before the Devil knows you're dead!" said Jimmy the Fiddler.

There was more laughter. The men folk kicked the remains of the worm-eaten saw horses into the fire. Flames sparkled in the fireplace, lightening the atmosphere. They leaned Liam's coffin against the wall while Jimmy and Michael struck up a jig.

Margaret unpinned her hair, stepped in front of the open coffin, and danced for Liam one last time.