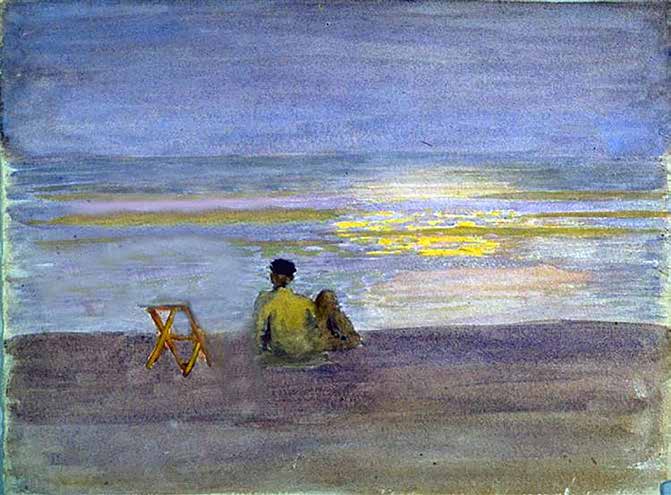 We met at the beach, on a morning I postponed work due to a melancholy mood. The sky, too, had grown gloomy, so the beach was otherwise deserted.

The man with mercury-speckled eyes read me a story that claimed a person born by the sea yearns to labor and die by the rhythm of the tides.

He carried a scuffed volume, Celtic Legendary, with text in Gaelic Script running alongside English translations—said he was teaching himself the Irish uncial alphabet. We sat on a dock, while he alternated between practicing Gaelic words and reading English versions of sea chanteys and legends, an exercise that darkened his eyes, aged his face.

When the tide rose to our knees, he ran ashore fast as a child and sank backwards into sand, his eyes and lips scrunched shut against flying granules. He swung his long arms up and down to sculpt broad wings, a whole row of them, strung together like an unfolded set of paper angels. “Sea seraphim,” he called the impressions. I tried to copy his technique, but sand stoppled my nose and ears on the first try.

We soaked ourselves clean and giggly and blue in the icy ocean. “Meet me here, tomorrow” he said, his eyes quicksilver bullets. I lay awake that night, anticipating our rendezvous.

The next day, sunshine illuminated differences and the tide washed away angel impressions.

Art: Cameo from “Man and Woman on the Beach” by Thomas Pollock Anshutz